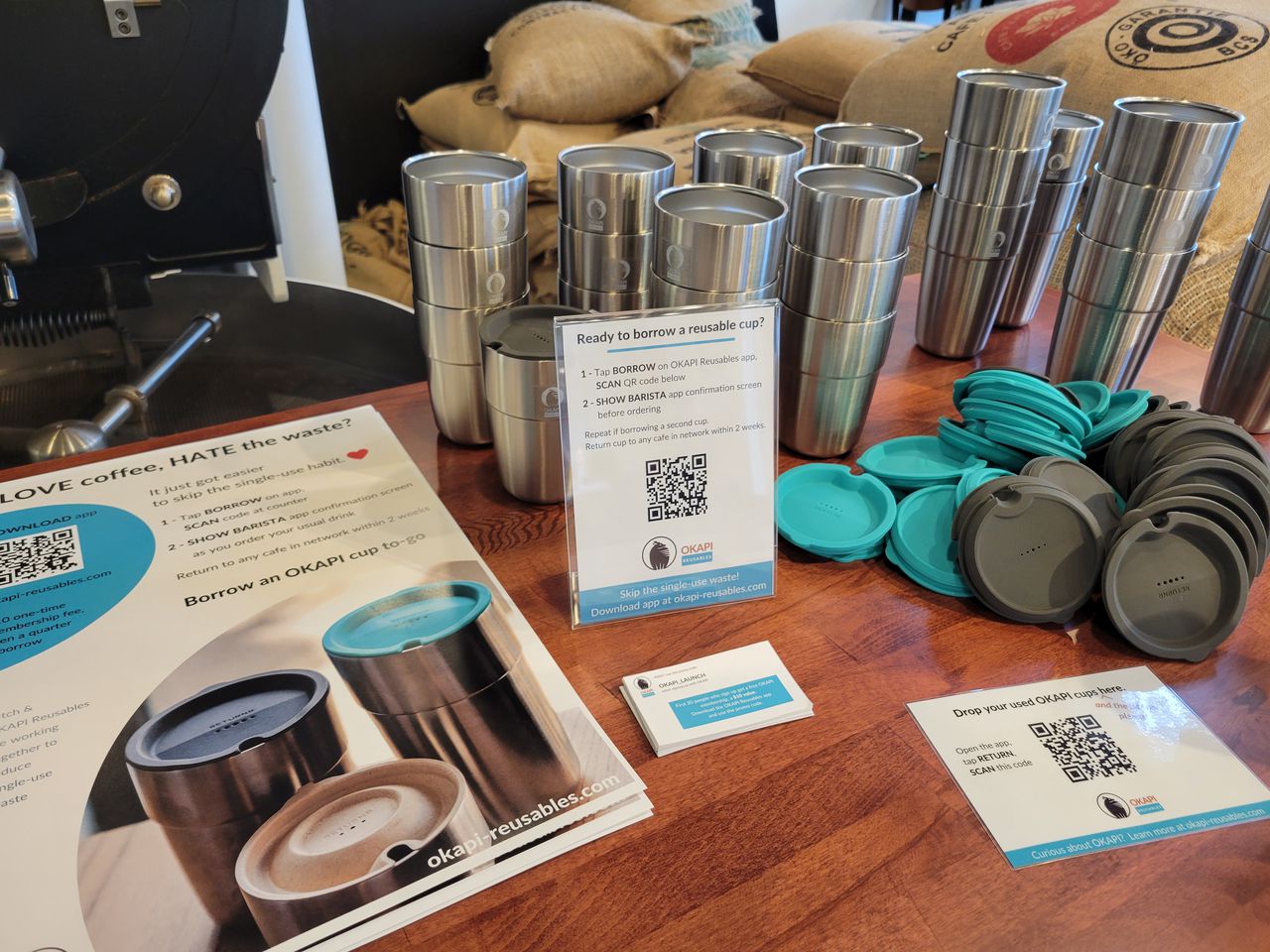 As Oregon coffee shops embraced to-go orders to keep their businesses afloat during the pandemic, the consumption of cardboard, paper and non-recyclable single-use plastics skyrocketed.

Oregon is no stranger to reusable initiatives. There’s GoBox, the reusable to-go carton used by restaurants around the city. Kroger-owned Fred Meyer is piloting a reusable container program in the Portland area.

But what about reusable cups for to-go coffee?

Instead of a cafe’s standard paper or compostable cups, drinks are served in insulated stainless steel cups that customers can take with them. A smartphone app keeps track of who’s borrowed a cup.

For customers, it costs a one-time membership fee of $10, and 25 cents to borrow a cup after that. Customers have two weeks to return the cup and lid to a bin inside any participating cafe in the Portland area. (There’s a $15 late fee if not returned within the two-week window.)

Cafes also pay OKAPI a small fee, comparable to the cost of a disposable cup and lid, for each cup borrowed. The cafes wash and sanitize returned cups in between customers.

Cheuh, who traveled to the Philippines the year before the pandemic, recalled how the pristine beaches she visited had to be cleared by resort workers each morning of plastic debris that had washed ashore overnight The image stuck with her.

And when the pandemic hit, Cheuh and Gray watched as the use of disposable containers skyrocket.

So they immersed themselves in researching solutions to plastic pollution. They were inspired, they said, by programs that promoted reusable containers elsewhere in the world, including Australia, New Zealand, much of Europe and Canada.

Reusables at coffee houses aren’t exactly new. Coffee drinkers have for years — with an interruption at many cafes during the pandemic — brought their own mugs to fill.

But Gray said her company’s service is complementary.

“If everyone brought their own mug, we wouldn’t be doing this,” she said. “People forget their own mugs, even when they intend to bring them. We all forget. With our service, the cups are there, ready when you are.”

Since then, 11 cafes have signed on to use OKAPI cups, among them Clinton Street Coffeehouse, Tiny Moreso, Lolo Pass and Vivienne Kitchen & Pantry.

Recycling Advocates estimates about 50 million single-use cups go to both landfill and litter each year in the Portland metro. And fewer than 5% of people bring their own mugs or cups for coffee, even before the pandemic.

To date, OKAPI has kept 1,000 cups out of the landfill. And it’s hoping that number will grow quickly.

OKAPI plans to recruit more neighborhood cafes this year, with a goal of getting 20% ​​or more from local cafes on board. (They are also interviewing cafe owners and boba fans to see if they can bring reusable cups to bubble tea cafes.)

But to fuel that growth, and spread to other cities, OKAPI hopes to win support from regional governments and business sponsorships.

With thousands of cups in circulation, making sure each cafe is adequately stocked becomes a challenge.

The company’s app tracks how many people are checking out cups in each location, and the data on cup movement can help detect if a cafe has too few or too many, and move some cups around as needed.

The project is a bit of a social experiment, too, to see if the reusable cup habit will stick. So far, OPAKI says, many of its users have become loyalists. Some have used the service more than 40 times since they signed up, generally at the same cafes.

Regular users also tend to bring cups and lids back within a few days rather than waiting the full two weeks, the company has found, so the cups circulate quickly.

Many participating cafes offer discounts on drinks served in reusable cups, whether brought from home or through OKAPI, that offsets the 25-cent rental fee.

Clinton Street Coffeehouse also added a surcharge of 25 cents to drinks served in disposable cups. They’ve since seen the volume of drinks served in reusable cups double — they now make up about 20% of the drinks they serve.

“The cup charge made a huge difference in changing people’s behaviors and starting conversations about waste,” said Kate Cordes, the manager of Clinton Street Coffeehouse.

— Jordan Hernandez | For The Oregonian/OregonLive