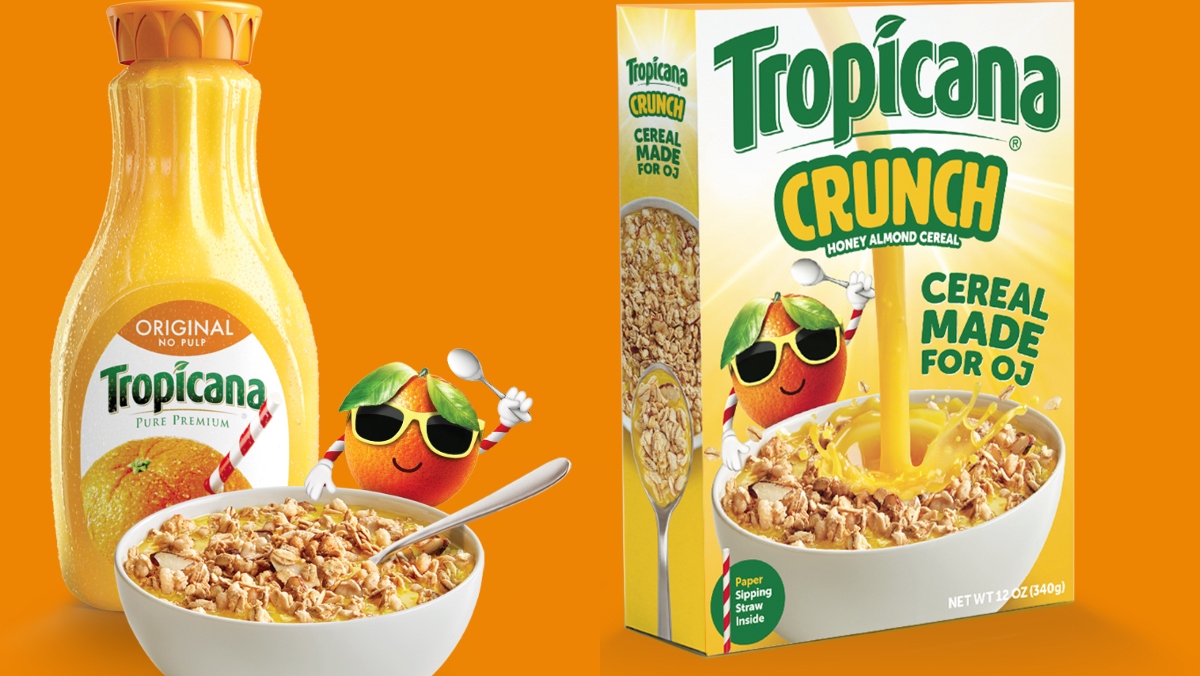 For a reasonably simple breakfast, cereal is ripe for discourse. There’s the age-old conundrum over that is the proper milk to cereal ratio, of course. And then there’s the debate over what the best cereal actually is. But arguably the most controversial take in the great cereal conversation is those who forgo milk altogether in exchange for orange juice. This is, according to a 2015 Kellogg’s survey, something a whole lot of people do. Tropicana is trying to further normalize the OJ in cereal game with their very own cereal.

Tropicana is launching Tropicana Crunch, just in time for National Orange Juice Day on May 4. There’s a shift in the Force coming for sure! According to the company, Tropicana Crunch is “the first cereal made for OJ (and maybe the last).” Specifically, it is a honey almond cereal that, in theory, should pair well with OJ. (We first saw this at Design Taxi.)

The brand is taking a very humorous approach to their new cereal, knowing it might be a bit controversial. On their website Launching the crunchy limited-edition product, Tropicana debuted a charming poem of sorts to usher in this new cereal era.

Orange juice on cereal.
Some call it weird. Some call it breakfast.
We… didn’t even know it was a thing.

But turns out, there are totally normal people
amongst us juicing up their cereal bowls.
You might be one of them!

So for those who are cereal curious like us,
we made Tropicana Crunch.
Cereal that’s down to be drowned in OJ.
Honey almond clusters that are
made to be spooned and sipped.
A breakfast taste test we can all take together.

Because whether you hate it or love it,
you won’t know until you try it.

Tropicana Crunch
It may not be for everyone
(but it could be for you!)

And once you’re done munching on the cereal itself, slurp up the rest of the OJ with the straw that comes with the box. The launches on May 4 and fans—or those with a curious palate—can snag a free box on the Tropicana cereal Crunch website while supplies last. This may all seem odd but it could be worse. We could be looking at another Froot Loops pizza situation.