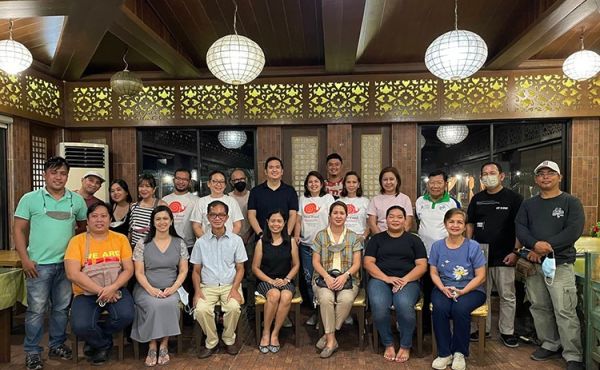 One of the projects of the Slow Food Community Negros with the DOT is Slow Food Travel.

It is aimed at raising awareness of the culinary bounty of the Philippine towns and provinces through meetings and exchanges with the farmers, fisherfolk, butchers, homemakers, bakers, along with the cooks and chefs who will cook their products; They are narrators of their local areas and unique guides to their local traditions.

It was a timely visit as Capiz was also celebrating their Capiztahan Festival, which was the celebration of the province’s 121st founding anniversary.

Manindahan Ta, a street market of local products, was also located at the side of the park.

Later that day was the relaunching of Tindog Capiz: A Voluntourism Campaign of the Provincial Government of Capiz spearheaded by Governor Esteban Evan Contreras II and Provincial Tourism and Cultural Affairs Officer Alphonsus Tesoro.

The RU Foundry / Eco Agri Foundation of Ramon Uy Sr. donated sacks of organic rice and brought a team of agriculturists who were to stay behind for a few more days to help some of the Capiz farmers restart by bringing with them power tillers and shredders that can help the locals make the fallen debris into organic fertilizers.

Slow Food Negros’ three-day culinary tour last April 22 to 24 was made more meaningful with the birth of Slow Food Capiz.

Christine Syching now leads the Slow Food Community – Capiz that will continue to promote Capiz’s pride with its advocacy on promoting locally sourced products and introducing them to more people so that these ingredients will continue to be part of the culinary history and tradition of the province.

The trip was organized by DOT-Western Visayas Regional Director Christine Mansinares to help strengthen the slow food movement in the region. (PR)