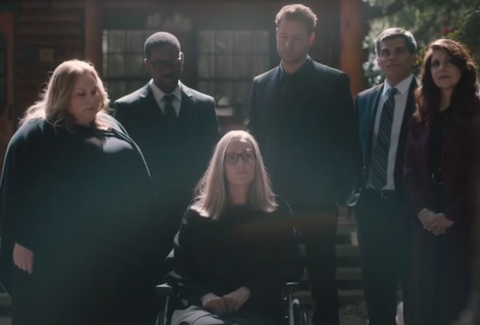 Just when we thought we couldn’t cry any harder, This Is Us hit us with a new season 6 episode all about Miguel (Jon Huertas).

With only a small handful of episodes left until the NBC drama comes to an end on May 24, the This Is Us Writers finally dedicated time to explore Miguel’s backstory while also showing in the present storyline the Pearson stepdad’s role as a caretaker to an ailing Rebecca (Mandy Moore). Tragically, however, we see Miguel spends so much of his time trying to be there for Rebecca that he puts off prioritizing his own health — and at the end, fans learn that he dies.

Though fans have had split opinions on Miguel’s character over the last six seasons — he married Rebecca after her husband/his best friend Jack (Milo Ventimiglia) died in season 2 — everyone was Team Miguel by the end of Tuesday night. But what makes the episode so much more powerful and heartbreaking is the way the This Is Us writers used an apple tree to connect Miguel’s story together. In the beginning of the episode, we are reminded that Miguel planted Rebecca an apple tree outside of the Pearson family home. Throughout the episode, we see the apple tree transform and endure all of the seasons — and at the end, a devastated Rebecca sits in front of that same tree as Randall (Sterling K. BrownKevin (Justin HartleyKate (Chrissy Metz) and Miguel’s kids spread his ashes.

While we all sobbed through that soul-crushing moment, one eagle-eyed fan on Reddit pointed out something else powerful about the tree — it’s connected to another great patriarch in the Pearson family. As fans can recall, earlier in the show we see Rebecca, Kevin, Kate and Randall spread ashes around Jack’s tree after his death to say their final goodbyes.

The fact that the Pearsons perform the same ritual multiple years later makes last night’s scene around the apple tree that much more powerful. In a sense, it shows that despite Miguel feeling like he was always living in Jack’s shadow, he is ultimately left as highly as Jack is in the Pearson family.

“The parallel to all of them standing around Jack’s tree after he died when they were all younger. What a heart breaking moment to show how much those 4 have been through together. It broke me,” said the fan who initially drew the connection.

Not sure how the writers can top that, but then again there are still three episodes of This Is Us left, so we’ll keep the tissue box nearby just in case they come up with something even more heartbreaking. We wouldn’t be surprised.

This content is created and maintained by a third party, and imported onto this page to help users provide their email addresses. You may be able to find more information about this and similar content at piano.io