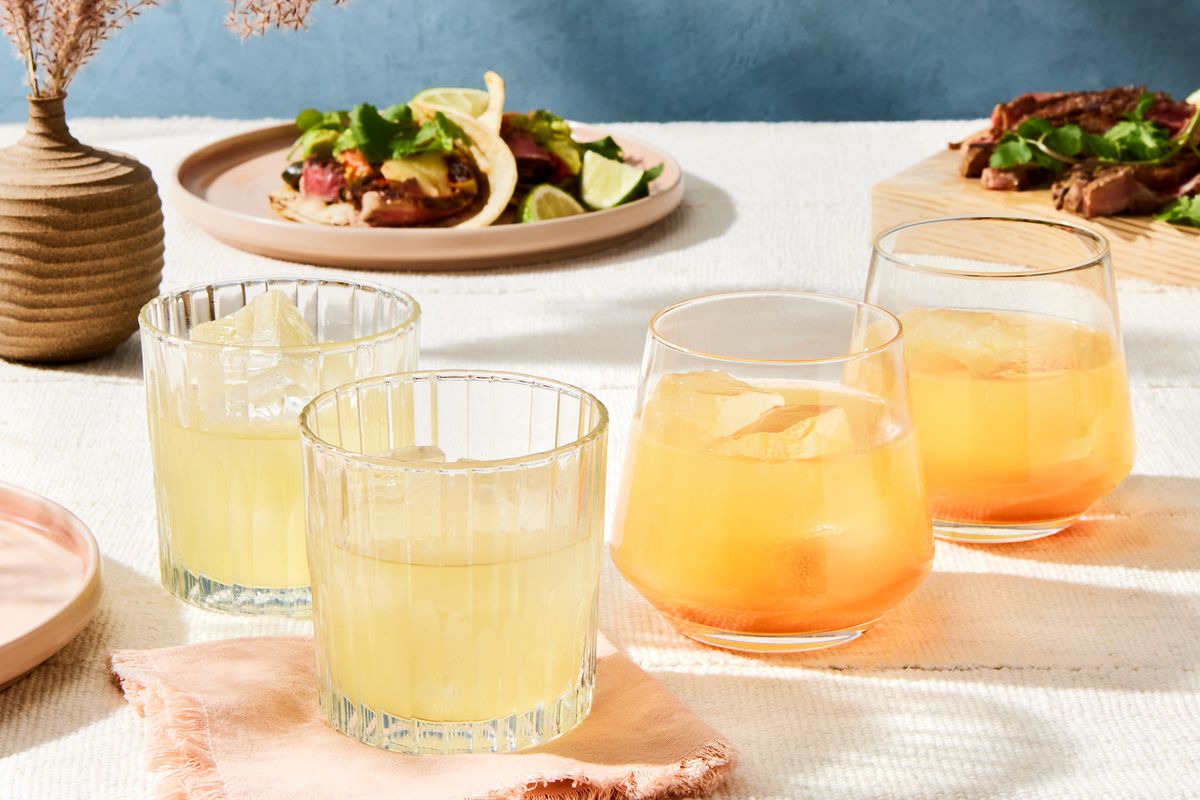 Mezcal and tequila are often used interchangeably for cocktails (I’ll take two smoky mezcal margaritas, please), but the truth is that they’re two very different Mexican spirits. Ever heard the saying, “All squares are rectangles, but not all rectangles are squares.” For starters, tequila is a type of mezcal, but mezcal is not a type of tequila. “The key differentiator is that while mezcal can be made from many varieties of agave, tequila can only be made from one: blue agave,” explains Autumn Chiklis, co-founder of The Pink Pig Tequila. Ahead, we break down the key differences between these two spirits.

Tequila and mezcal are produced in completely different ways, which contributes to the distinct flavor profiles of these two agave-based spirits. But first, a quick lesson in botany: Both tequila and mezcal are made with piña, which is the word used to describe the core of the agave plant (piña translates to pineapple in Spanish and the center of the agave plant looks like a pineapple) .

Here’s where the two diverge: tequila is made by cooking pina in ovensthen shredding and fermenting it before distilling it in copper pots. Mezcal, on the other hand, is made by cooking the piña inside an underground pit that’s lined with a combination of volcanic rocks, wood, and charcoal, says Chiklis. And instead of using copper pots, mezcal is distilled in clay pots.

Once distilled, both tequila and mezcal are typically aged in oak barrels anywhere from a couple of months to years and years. “Both tequila and mezcal, when aged for two months and up to twelve months, are categorized as reposado. If they are aged longer than that, typically one to four years, they fall under the añejo category,” explains Chiklis. If they’re not aged at all, they’re considered “blanco.” Blanco, which is clear rather than tinged yellow or brown, is the type of mezcal you’re most likely to encounter in the States, and the kind of tequila most often used in margaritas.

We’ve already talked about the fact that agave is cooked in two distinct ways to make mezcal and tequila. So how does that affect the end flavor? The smoke swirling in the air in the pit gives mezcal its signature smoky depth. “If you grill a chicken breast versus if you boil a chicken breast, the flavor is going to be much different,” explains James Simpson, beverage director of Espita Mezcaleria, comparing the two cooking processes. Beyond the smokiness, Simpson says mezcal has an earthy quality with deep, caramelized flavors.

To really evaluate both tequila and mezcal, Simpson recommends serving them at room temperature in a wide glass (like a clay copita) so that you can appreciate both their aroma and flavor.

But Wait…Why Is Tequila So Much More Popular?

In the last five years or so, mezcal has become more popular as a spirit, but historically, tequila has been a staple of the American bar scene. “Tequila has gone down a more industrial path. It went through a huge growth that mezcal never has,” says Simpson. “When we talk about tequila, we’re really talking about one type of mezcal that has gotten a lot of money and experienced a huge boom in the US,” adds Simspon. Celebrity-backed tequila brands like Kendall Jenner’s 818 Tequila, George Clooney’s Casamigos, and Nick Jonas’s Villa One have certainly helped boost enthusiasm for the spirit. Mezcal, on the other hand, is quirkier and often made in much smaller batches, meaning it translates less well to mass production.

You won’t always find mezcal in this classic Mexican cocktail—but you’ll be so glad when you do.

Roasted strawberry purée transforms this mezcal-based margarita into a complex, slightly sweet, slightly smoky drink that we’re sure to sip on repeat all summer long.

We can’t talk about tequila without sharing our favorite recipe for a margarita. It calls for a classic combination of tequila, Cointreau, fresh lime juice, and agave syrup—plus salt and lime wedges for a garnish. As for what type of tequila to use, we recommend a smooth reposado (lightly aged), such as Cazadores Reposado. It doesn’t pack too much of a punch and balances well with the rest of the flavors in the drink.

Move aside, whiskey, and make room for tequila. We had a little (okay, a lot) of fun changing up the recipe for this timeless cocktail by swapping an Añejo tequila in place of the usual whiskey and incorporating mole bitters.

Once again, we said goodbye to whiskey and gave a great big hello to tequila in this delicious twist on an old fashioned drink. Tequila still contains plenty of warm, sweet flavors like vanilla and caramel so you’ll get to enjoy all the cozy feels.

Are you team mezcal or tequila? Let us know in the comments below!

This post contains products independently chosen (and loved) by our editors and writers. Food52 earns an affiliate commission on qualifying purchases of the products we link to.