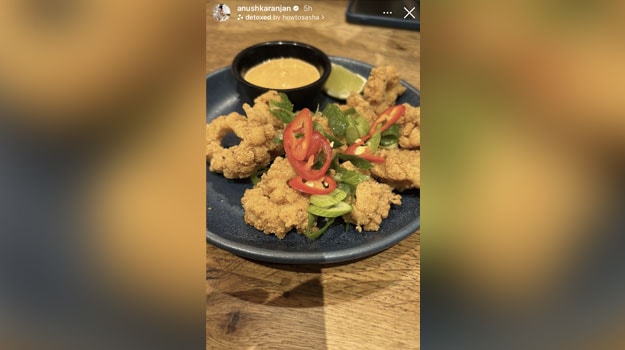 Actors Anushka Ranjan and Aditya Seal, who got married a few months ago, are currently in London. Given just how much the couple loves food, it is not surprising that their Instagram updates from the holiday are filled with culinary posts. And, it looks like Anushka and Aditya are in the mood to indulge in some delicious surf-and-turf style meals while in London. In Instagram Stories, Anushka shared that the couple had visited a restaurant named Burger and Lobster for a drool-worthy meal which started with a plate of crispy calamari. The calamari was topped with chilli, lime and served with a side of Singapore mayo.

Next on the list were some yummy burgers with delicious filling and cheese drizzled on them. We also spotted two sauces and a side of fries that served as the perfect accompaniments to the burgers. Anushka Ranjan and Aditya Seal ended the meal with a round of cocktails. 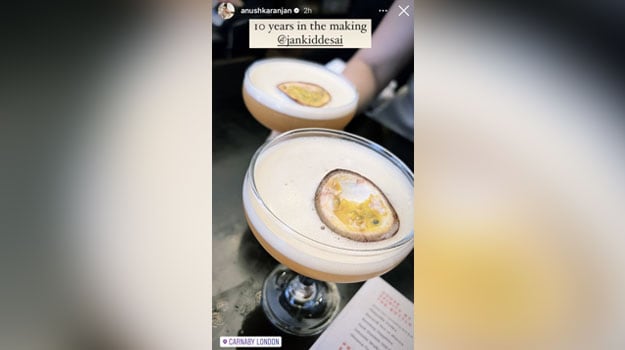 Anushka Ranjan and Aditya Seal are true foodies and we have ample proof of this. Recently, on their trip to Agra, the couple was seen indulging in a range of street food. Anushka shared an image of herself digging into a plate of crispy aloo tikki topped with green chutney as well as tangy tamarind chutney.

Soon after their marriage, Anushka Ranjan was also treating Aditya Seal to some homecooked delicacies. She cooked him a bowl of gnocchi with pesto sauce, topped with cheese on the top. She served it with freshly baked croissant by the side. Click here to see how it looked.

Recently, the couple also went for a breakfast date and made sure to give us a sneak peek of their picks for the meal. On their Instagram Stories, we spotted tacos, lettuce salad with sour cream, a range of dips, and a milkshake topped with cream and biscuits. Along with the image, Anushka said, “Breakfast for champions,” tagging her husband.

Coming back to Anushka Ranjan and Aditya Seal’s London trip, we can’t wait to see the next chapter of their gastronomic adventures from there.