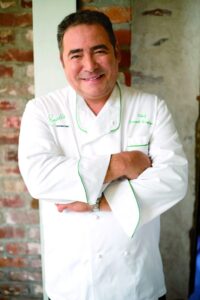 You might say the “Bam!” moment in the life of trailblazing celebrity chef Emeril Lagasse came many years ago courtesy of a pastry chef he admired.

The pastry chef introduced Lagasse to the book The Magic of Thinking Big by David Schwartz.

“It’s a motivational book, but it changed the way in how I think, because if you don’t think big, maybe you’re not going to be big,” Lagasse says. “If you think small, it’s probably what you’re going to end up being.”

Lagasse talked about thinking big and his journey on the road to culinary success in the May episode of the 21st Century Business Forum, a webcast that features monthly one-on-one interviews with some of the nation’s most prominent business minds and thought leaders.

Lagasse opened his flagship Emeril’s restaurant in New Orleans in 1990 and a few years later was approached by a production company that was creating shows for a new network focused on food and wine. How to Boil WaterLagasse’s initial show for The Food Network, would morph into The Essence of Emerilwhich would transform the chef into a celebrity and would put the network on the map.

A couple seasons into the show, Lagasse says, he and his then-agent, Shep Gordon, were walking in New York and “people were yelling out the window” Emeril’s trademark “Bam!” at the two men while cabbies beeped their horns at them. All the attention led Gordon to say that Emeril “might be making some impact on this thing called television.”

“It became apparent to me that people wanted more … of Emeril, and how was I going to do that?” Lagasse says.

The entrepreneur in Lagasse would respond to that demand for more by creating cookbooks—the first of his 19 being New New Orleans Cooking—and starting a spice company with Gordon so that viewers could bring home the flavors featured on his show. He later would broaden his marketing base with a line of cookware and cutlery bearing his name.

As befits a chef who is hands on in the kitchen, Lagasse says he also was “very, very involved with creating” those products with the manufacturers.

“Today, a lot of these guys and gals—without mentioning names—they’re just putting their names on stuff that they don’t even know what it feels like, what the weight is, how it’s gonna look, how it’s gonna last ,” he says.

To Lagasse, quality is everything, which is why he sets high standards not just for his chefs but for all members of his team.

“Whether you’re a busboy or a dishwasher, there’s no compromising the level of quality of where we want to be,” Lagasse says.

He says he doesn’t ask people to do anything he wouldn’t do in that quest for quality.

“If I bend over and pick up a piece of paper that somebody dropped into the bathroom or by the front door, I expect you to be able to pick up the piece of paper as well.”

The 21st Century Business Forum features monthly one-on-one interviews with some of the nation’s most prominent business minds and thought leaders. It is presented by Business Report and sponsored by the East Baton Rouge Parish Library and Home Bank.